We systematically studied the seismic structure at the top of the inner core by using differential travel times and waveforms of the PKiKP and PKIKP (Figure 1 inset). We have discovered that the outermost 100 km of the inner core has a hemispherically distributed heterogeneous structure, rather than an anisotropic one (Figure 1). A recent study suggests that hemispherical distribution of temperature above the ICB may be produced by downwellings in the mantle. Therefore, the implication of the presence of a different layer in the outermost region of the inner core is very important to our understanding of the physical process of inner-core growth, and also of mantle dynamics. We are currently studying the transition between this boundary layer and the deeper anisotropic portion of the inner core, as well as the east-west transitions. 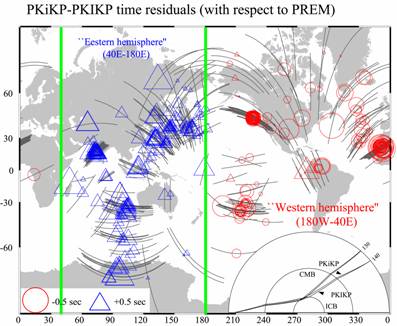 Figure 1. Map view of PKiKP minus PKIKP travel time residuals displayed as lines along ray segments through the inner core and as symbols at the turning points. The residuals are calculated with respect to the PREM. Red circles and blue triangles represent negative and positive residuals, respectively. The size of the symbols is proportional to the absolute value of residuals. Ray paths of PKiKP and PKIKP at distances 130° and 140° are shown in the inset.