The nature of heterogeneities in the lower mantle is important in understanding Earth's evolution. The seismic signatures of the lower mantle heterogeneities generally appear to be more subtle than those of the upper mantle except for the lowermost several hundreds of kilometers. We have observed clear later arrivals 40-90 seconds after P wave at seismic stations in Japan (J-array) from deep earthquakes that occurred in the Mariana and the western end of the Indonesia subduction zones and found that these later arrivals are generated at underneath velocity reflectors (discontinuities) at depths around 1000 kilometers (Figure 1). We are currently working on the details of the lateral extension and seismic properties of the mid-mantle reflectors in order to understanding the possible mechanisms capable of producing these seismic structures. 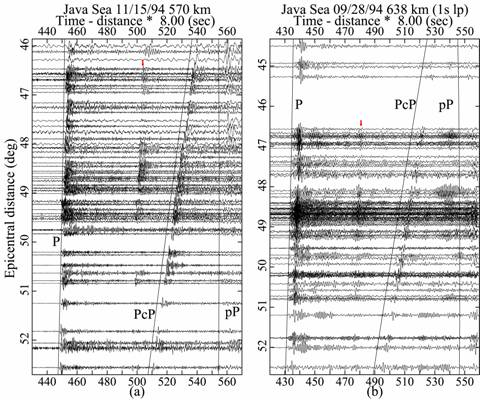 Figure 1. Seismograms recorded by the J-array stations from two deep earthquakes occurred at the western end of the arc. Large amplitude latter arrivals at 40-50 seconds after the direct P wave (indicated by red arrows) are identified to be S to P converted waves at strong seismic reflector located at about 1000 km beneath the arc.